A Brief History of IT Infrastructure – The Beginning

“Those who cannot remember the past are condemned to repeat it.” – George Santayana

The relaunch of this blog seems a fitting place to start at the beginning, recap the evolution of IT infrastructure, and consider some of the macro trends involved. This won’t be an exhaustive nor a highly technical history of computing – there are many fine resources that do a far better job than I ever could. Instead, I’ll focus on some key inflection points and trends that got us to where IT infrastructure is today. Also, I’ll look at some of the social and business factors associated with the history of computing. Usually, computing history focuses more on the technical aspects and ignores these factors. This post will cover the early days of computing, up to the early 1960’s.

Although primitive computational devices had been around for some time, the modern digital computer started to appear in the 1930’s before the beginning of World War II. The war placed many demands on the nascent field and birthed the most recognized computer of that time – the “Colossus” used by Alan Turning to break the supposedly unbreakable German Enigma code.

Computers of this era were built for a specific purpose – usually military – such code breaking, calculating artillery range tables, and calculations for the design of the atomic bomb. The machines were huge, unreliable, slow, and had a simple architecture, which limited their application to a small range of problems. Knowledge of computing was very limited, they were typically used and programmed by the same people which designed and built them, as they were the only ones which a sufficient understanding of machines.

Development of electronic computers continued through the 1940’s and early 1950’s, but the first business use of computers started in 1954 with the introduction of the IBM 650. The IBM 650 was easier to program and less expensive than previous computers, which lead to more widespread use. Approximately 1800 units were sold. 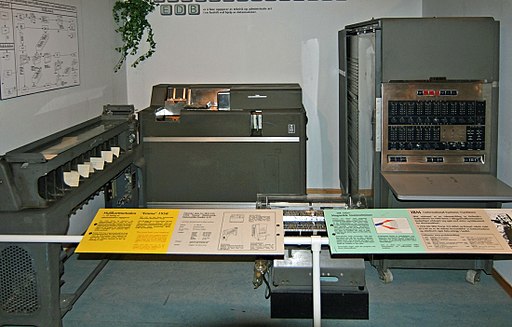 Although computing became more accessible with the introduction of the IBM 650, usage was still restricted to trained experts. Machine time was still very expensive and the needs of the users were subservient to the needs of the computer. This created a sort of mystique around computing, and the average person wasn’t much affected by computers – except maybe when a “computer error” at a big corporation over-billed them. For many in the computing field, this may have seemed like a golden age as they were held in high regard and weren’t bothered by pesky users. That would change over time.